How to identify your own critical leadership skills

We all have some of the inherent qualities that make a good leader. The trick is to learn to identify these critical leadership skills so you can develop and use them strategically. In a nutshell, that’s the philosophy espoused by leadership consultant, trainer and corporate coach Jochen Hekker. His leadership model LiDRS – which doubles as the name of his company – enables leaders at all levels to discover their personal management abilities. As he likes to put it, ‘you need to know which knobs to twist on your personal turntable.’

In your book Leiders! (‘Leaders!’), you describe how you learned to develop your leadership skills the hard way. You went to naval college, which is notoriously gruelling – complete with enduring one of the infamous hazing rituals as part of the transition to naval life – came to blows with your superior during an operation at sea, and on top of that you qualified as a scuba diver and were deployed to Afghanistan several times. In your book, you also address the almost Kafkaesque cultural differences that exist between the various links in the NATO chain of command. I’d say that’s a far cry from the career path of your run-of-the-mill Dutch corporate executive!

‘Yes, and I’m very aware of that. Then again: we’re talking about universal qualities – building blocks, if you will – that are intrinsic to all human beings. Since I spent more than 20 years working under rather challenging circumstances, I inevitably had a steep development curve. But what it’s essentially about is learning exactly what critical qualities are required for good leadership, and when you might need to ramp up or tone down some of those qualities in order to achieve your goal. It’s about knowing what the knobs on your personal turntable are for and which of these knobs you need to twist when.’

As part of the LiDRS model, you define a number of ‘baskets’, as you call them, each of which contains certain personality traits and skills. You distinguish between management qualities, perceived qualities, diplomatic qualities, social qualities and action-oriented qualities. Are those the various knobs that leaders can twist on their ‘turntable’?

‘Essentially, yes. The only thing is that each basket contains both traits and skills. We believe that personality traits are pretty much fixed and unchangeable: the best you can do is to try and understand those traits and truly get to know yourself and your behaviours. Skills, on the other hand, can be trained. You should imagine each skill as a knob that you can twist as needed in order to compensate for any critical leadership qualities you find you might be lacking.

‘For example, having a lot of natural charisma is a huge asset for any leader. If you don’t have that kind of innate charisma, however, you can make up for it by, say, having a healthy dose of flair combined with a strong demeanour and personal presentation. Flair is something that can be trained to some extent, and the same is true for being personable and thoughtful in your actions. These are all perceived qualities that help you to come across to others as a strong leader.’ 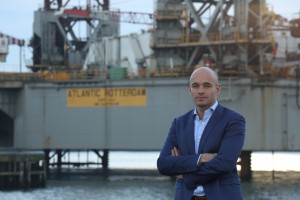 Your model is based on three aspects of leadership that you refer to as ‘up, down and across’. What does that mean?

‘The best way for me to explain that is to share an experience from my own life. Years ago, when I was still in the navy, I ended up in a work conflict with my commander. There was another rank between us, a Lieutenant Commander. Anyway, to give you the short version: it started out with some tension between us, which escalated into a few serious confrontations, only for the whole situation to explode at some point. When something like that happens, you can’t help but wonder afterwards: what could I have done differently; how should I have handled this instead? That’s when it dawned on me that I needed to roll with the punches and adapt to each specific situation as needed. I had failed to show adequate “up” leadership in this case: I had neglected to empower my immediate superior by not presenting him with convincing arguments that he could have brought before the commander.

‘I was so convinced that I was right that I ended up in an isolated position, when in fact I should have tried to connect with others during that conflict. I also should have realised that my commander had made that rank for a reason; I should have explored how I might have been able to learn from him instead of simply dismissing him as a poor leader. In other words: I was still lacking the skills I needed at that point to be able to hold my own in a variety of situations and to achieve my personal goals regardless of the circumstances. And that is what I consider the hallmark of a true leader, irrespective of the level at which you’re operating.’

Doesn’t someone’s personal leadership experience play a key role in knowing which knobs to twist on their personal turntable?

‘Yes, of course, especially in everyday situations. Having that experience helps you to assess not only what’s required in a specific situation – is it better to focus on maintaining the status quo, or should you start working on a new long-term strategy instead? – but also what’s needed in the organisation more broadly. Leadership in a “feminine” organisation such as, say, KLM is vastly different from leadership in a “masculine” organisation, like companies operating in the offshore industry.

‘And finally, experience helps you to understand what it is the people in the organisation need from you. This is related to people’s experience – including work-specific experience – and level of professional knowledge. I like to compare it to the work of a DJ: DJs play around with sound, volume, light and so on to make the magic happen. Can that same DJ pull the same thing off again at a different venue in a different city the next night? The answer is a resounding no. While the factors light, sound and volume are still there, the vibe at that new club is going to be different, and the DJ is going to have to pull out a different bag of tricks. But even in this new venue with a different crowd and a different atmosphere, he can still twist the knobs and see what happens.’

The basket labelled ‘action-oriented qualities’ contains qualities such as ‘tough’, ‘demanding’, ‘gutsy’, ‘ambitious’ and ‘decisive’. It seems that what many would consider the number-one leadership quality – dominance – is missing.

‘I don’t agree that dominance is essential to being a powerful leader. Evolutionary psychology has taught us that it is not effective as a successful leadership strategy. Take a band of gorillas, for example, where you’ve got one dominant male, the silverback. All the other males in the troop have only one goal: killing him and his offspring and then impregnating the females. They’re ready to stab their leader in the back the first chance they get. In a human context, it’s all about social acceptance, which means the leader should be part of the group, rather than trying to control it from the top down. We want a leader who holds the group together, someone who communicates and coordinates, and who makes sure everyone gets an equal piece of the pie. That’s integrity in its most basic, tribal form. People will only accept dominance if the survival of the group is compromised in some way, but in any other setting they’ll reject it.’

You describe in your book how, on several occasions, you were hired as a ‘new’ manager to lead a team of highly experienced professionals. How did you manage to win the trust of these people time and again?

‘To get back to evolutionary psychology: we use our reptile brains to size up people we meet for the first time in a split second. We pigeonhole them into narrow categories such as “friend”, “enemy”, “potential mate” and “indifferent”. When you’re first hired as a manager in a company, people’s attitude towards you tends to be the latter. But you want them to start thinking of you as their friend, as that makes them much more likely to back your decisions.

‘And this is something you absolutely can control. Moral of the story: you need to hit all the right switches to communicate to people that you can be trusted, that you’ve got their back, that you understand where they’re coming from and that you have the energy and passion needed to bring positive change to the organisation. You need to do this through both verbal and non-verbal communication – the latter is arguably even more important. At the same time, you have to be firm and stand your ground rather than trying to please everyone – particularly if there are problems in the organisation, which you’ll find is nearly always the case. You have to spend the first few months running the gauntlet, but if you’ve mastered all the skills in your personal “leadership repertoire”, you can come out on top in any situation.’

Leading up, down and across – Out now!

Everyone possesses the characteristics of a good leader. Learn to recognize them, develop and deploy them with this book and the LiDRS-model that goes along.

Start the development of your leadership!